Old Glass: Reflections on why and how to preserve it

So accustomed are we to buildings made almost entirely of glass that it is hard to imagine a time when this material was rare and precious. We take for granted the transparent protectiveness that allows us to enjoy the outside while we’re inside, watch the rain without getting wet, or illuminate a room without burning a bulb. But in the crude cabins occupied by early American colonists and African American slaves, a window was often just a hole in the wall with a hinged shutter. In America, it wasn’t until the 18th century that windows were widely regarded as architectural, not just practical, components of houses. By the end of the 1700s, the use of glass windows-except for very humble dwellings-was common. 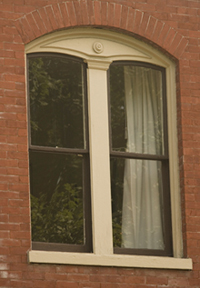 Glass remained small in scale, high in price until technology made it possible in the 19th century to produce large panes of glass. Around that time builders learned to construct lightweight structural frames of iron and steel capable of encasing entire sections of glass. For example, in London’s Crystal Palace, built in 1851, walls and ceilings- not just windows -were made of glass. The inevitable next step was the skyscraper wrapped seamlessly in a transparent skin of glass.

Unlike traditional building materials that age, new glass remains pristine over time. Old glass, on the other hand, has a distinctive patina in the form of bubbles, blisters and waves. When you look through old window glass, the visual distortion can soften shapes into an Impressionistic blur. A look at the types of glass and the processes by which they were made will help renovators understand the importance of preserving old windows and glass.

Crown glass, a method practiced up to the 19th century, is noted for its clarity and luster and is found in windows of very, very old houses. To make it, glass blowers gathered a large mass of melted glass at the end of a blow pipe and blew a large bubble that was transferred to a rod and then spun at high speed until it opened and flattened. This large disc was removed from the rod and placed in a kiln. Once tempered, the glass was cut into small diamonds (for latticed casement windows) or square panes. A trademark of crown class is the "bull’s eye" that formed at the center of the molten disc and the circular marks near it. Phoebe Phillips in Encyclopedia of Glass, speculates that the ability to produce only small pieces of glass explains the small panes in very old windows.

A cheaper, more efficient method of glass making for windows was necessary. Cylinder glass, the most common form of glass found in American houses from the 18th to early 20th centuries, was a variation on crown glass. Instead of blowing a large bubble, blowing a long cylinder of glass made longer, thicker pieces of glass possible. The large molten cylinder was swung side to side in a trench and lengthened. The ends of the cylinder were cut off and the glass reheated. As the glass softened, it opened and flattened into sheets of glass. Marred by blistering, uneven thickness and tool marks, cylinder glass lacks the refinement and lucidity of crown glass, but its irregularities give it its charm. Most of the glass you’re likely to find in 19th century American houses is rolled machine glass. 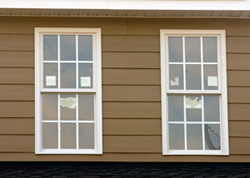 Notice the lack of translucence in these vinyl replacement windows.

By the early 20th century, the Flat drawn process lowered the cost of producing perfectly smooth, even sheets of glass. By mid-century it could be made in just about any dimension. Today, in contradiction of its early history in America, glass is among the most economical building materials. Restoration Tips: Every effort should be made to preserve glass original to a house, especially if it’s pre-1840. Crown glass should absolutely be preserved. Cylinder glass, on the other hand is newer and more plentiful. If your house is late 19th century, you shouldn’t have a problem replacing broken or cracked panes. Architectural salvage businesses are good places to find pieces that can be cut to fit your needs. Exterior storm windows offer the best protection for your old glass.

If clear glass is about lighting rooms, stained glass is about drawing the curtains. Its heyday in the Victorian period coincided with an aesthetic interest in making more colorful a world which industrialization rendered increasingly dirty, dark and soot-stained. For centuries European cathedral windows tempered the drabness of medieval cities soiled by poor sanitation and plague. In the U.S. stained glass windows were similarly associated with churches, where they became commonplace by the 1830s. Not until the 1850s did stained glass begin to turn up in houses, but only the costly residences of the well-off.

The following historical information about stained glass is from a Virginia Commonwealth University graduate research paper (2007), by Leanne Reidenbach, a student of art history professor and author, Dr. Charles Brownell. Reidenbach discovered early evidence of stained glass for domestic use in A.J. Downing’s influential 1842 book, Cottage Residences. A quote from Crockery and Glass Journal 40 years later reflected the continued admiration for stained glass:"modern fashion decides that light transmitted through color is pleasanter and more artistic than the full glare of the white light of the day, and so handsome houses today all are more or less decorated in it." Although stained glass was revered for "uplifting the wearied mind" and "enchanting the eye," it also served practical ends. Colored glass diffused light and provided privacy in bedrooms and bathrooms. Just as stained glass windows prevented people from seeing in, it also protected those on the inside from unattractive views. As cities became more populated and houses built closer together, scenic views diminished. Therefore, stained glass provided a visual diversion in transoms and at stair landings. Many floor plans in the late 19th century placed dining rooms at the rear of the house facing a back alley. This explains why stained glass often turns up in dining rooms of late 19th-early 20th century houses. 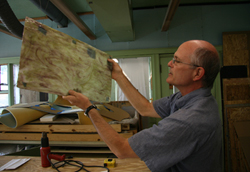 Stained glass windows feature transparent and/or opaque glass separated by lead glazing bars. Because leaded colored glass was very expensive, alternatives developed in the Victorian era. One was to border a clear glass window with colored glass. Another was "diaphanie," the use of thin sheets of linen paper in colored patterns to produce a stained glass effect. In the late 1880s, diaphanie craft kits allowed ladies to design at a reasonable cost personalized mosaic and figural windows.

According to stained glass conservator Scott Taylor, most of the stained glass homeowners are likely to encounter in late 19th-early 20th century homes is rolled machine glass in the form of cathedral and opalescent glass. It is nearly impossible to identify the source of this glass, as it was manufactured in large quantities and sold in sheets to decorative firms, which then assembled the glass into windows. Mass-marketed stained glass featured patterns popularized in pattern books and trade catalogues. Custom work made its way only into the houses of the wealthy, public buildings and churches. If a medieval glazier happened to walk into Taylor’s studio today, he would see stained glass made by the same ancient process. It still begins with a small-scale sketch, and then the window is built to the full size cartoon (the outline for the window’s artistic design). The cartoon is traced and lead lines added with the glass cut into desired shapes. After cutting, the glass is assembled. Each piece comes together like a puzzle using the exterior frame as a guide in a process known as glazing. As other pieces of glass are laid on the lead, the design unfolds.

By the 1930s, stained glass windows began to look old fashioned. Architectural styles favored simplicity and modernity over heavy Victorian ornamentation. With the Depression and World War II came a scarcity of resources that helped seal the end of a long and colorful craze for stained glass in American homes.

Taylor says that a properly fabricated and installed stained glass window will last 80-100 years before it needs treatment, unless it is damaged. The first things to check are: 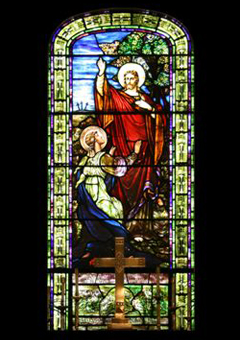 This window at historic St. John's Episcopal Church (Richmond, VA) is similar to others. It was cost-effective to reuse a design if it worked in.

Unless you’re a qualified expert, don’t try to fix a stained glass window yourself. To find a conservator, contact your local historic preservation organizations or local or state museums. (In Virginia try the Virginia Conservation Association. Trying to apply protective material around the window "put down the Plexiglas! - may simply enclose moisture and cause your wooden framing to rot, in addition to affecting the longevity of the stained glass.

If protective coverings are applied - venting is a must. Remember: Stained glass lives longer and looks better if left exposed to the weather. Taylor suggests that cleaning the window is as far as homeowners should go. "Many windows have been brought to me-in pieces-after someone tried to push or pry a lead support back into place. Don’t try it," he warns. "If you can’t get an expert to repair it, clean the window and leave it alone."

Many thanks to Professor Charles Brownell, Leanne Reidenbach and Scott Taylor for generously sharing their expertise on the subject of old glass and providing valuable assistance to those involved in its preservation.