The Ginter Park Historic District, one of Richmond's first streetcar suburbs, was conceived and planned by Major Lewis Ginter, a prominent Richmond industrialist and philanthropist of the late 19th century. Ginter made his fortune marketing pre-rolled, pre-packaged cigarettes and was co-founder of the American Tobacco Company. In the early 1890s, towards the end of his life, Ginter turned his ambitious attention to comity planning by purchasing several hundred acres of farmland in Henrico County north of Richmond and beginning the construction of streets and utilities that would serve a new comity.

Ginter's concept for his development epitomized state-of-the-art community planning in its day by its generous residential plat subdivisions organized in an extended grid pattern, its varied and eclectic juxtaposition of fine single family dwellings within the grid layout, and its trend-setting reliance on the new mechanical wonder, the electric trolley, to carry its residents to and from the city center as well as to the Lakeside Park and Country Club farther north.

This streetcar system, which served Ginter Park from 1897 to 1929, was owned by the Brookland Railway and Improvement Company and operated by the Richmond Railway and Electric Company.

Ginter Park was further identified as a distinctive neighborhood when it became incorporated as a town in 1912 and established its own by-laws, mayor, and municipal services. The first mayor of the Town of Ginter Park was the Honorable John Garland Pollard, who later served as Governor of the Commonwealth of Virginia from 1930 to 1934. Ginter Park was annexed by the City of Richmond in 1914 and today represents the residential planning that gives it its local reputation as "Queen of the Suburbs". The Union Theological Seminary, the primary architectural and institutional focal pint of Ginter Park, is today a National Register landmark in its own right. In 1898, the Seminary decided to relocate its campus from Hampden-Sydney to Ginter Park after the philanthropist offered land for the new complex in the heart of the residential comity. Ginter Park features a wide array of late 19th-and early 20th-century architectural styles ranging from modest weatherboarded builders' cottages to large pretentious Colonial Revival mansions. Other distinctive styles found throughout the historic district include Tudor Revival, Spanish Colonial, Bungalow, American Foursquare, dignified Queen Anne, and Shingle Style. Unique examples of poured-in-place concrete structures with Colonial Revival appearances provide an interesting deviation from typical construction practices of the 1920s seen along one block of Seminary Avenue. The variety and innovation of single family housing types within Ginter Park make a tour down any of its wide avenues a textbook study in American architectural forms of its period.

Information from The National Register of Historic Places nomination form prepared in February, 1986 by Douglas Harnsberger, who wrote the introduction, and Anne Thorn, who provided the house survey. Featured photograph by Maurice Duke.

These four, stone-fronted houses stand on the south side of Grove Avenue in the 2900 block facing the landscaped parking area and green rear lawn of the Virginia Museum [of Fine Arts]. Three of these, built in the late 1890s, are in the Queen Anne style with the fourth (2901), a square stone house with some Spanish Mission features, at the eastern end of the block. The three Queen Anne houses are similar in form and present a visually uniform front to Grove Avenue. Double front doors open in the corner of 2905 and 2911 and are sheltered by conical porches with Eastlake scroll work decoration. 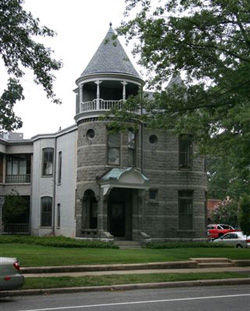 Other features which add to the charm of these Queen Anne houses is the row of wooden carriage houses with cupolas and gingerbread scroll work lining the alley running behind the houses and the well-trimmed lawns with their informal plantings.

The land on which these houses are located was part of the holdings of the Harvie family in the first part of the 19th century. Anthony Robinson bought the tract in 1847. In 1886, the land south of Grove Avenue was sold to the West End Land Improvement Company, a joint stock company headed by Major James Dooley and others. This company, and several others in Richmond, planned to subdivide and develop the areas on the outskirts of town. This was done in many areas, but the 2900 block of Grove remains as an example as the most successful survivor of the success of the late 19th century Richmond West End development.

Information from The National Register of Historic Places nomination form was prepared by the staff of the Virginia Historic Landmarks Commission, October 1972. Featured photographs by Maurice Duke.