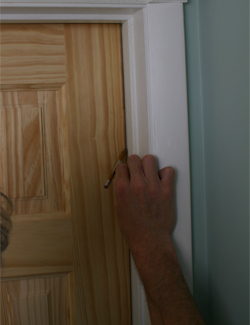 With the (oversized) door held against the edge of the jambs, the finish dimensions for the door are determined by tracing along the face of the jambs with a pair of scribers.

Q: Can you tell me how to install a new door in an old jamb that’s seriously out-of-square?

A: Rarely will you find an old door jamb that’s perfectly plumb, level, and square. If you’re performing a gut renovation that entails removing the plaster on both sides of the opening, it’s a simple matter to reframe the jamb. Otherwise you’ll have to cut the door to fit the unique shape of the opening. Rather than taking a series of measurements, the simplest way to do this is to prop the door against the jamb and trace the jamb’s interior dimensions on the face of the door using a pair of scribers (a small compass-like tool that’s available at any hardware store).

The new door should be slightly wider than the jambs. Place the door against the jambs on the same side as the existing hinge mortises-remove the hinges so they don’t get in the way-and shim the door off the ground until its top edge is higher than the head jamb.

Make sure that the door is centered in the opening (not cockeyed). Then adjust the scribers so that the tip of the pin just touches the pencil-this setup allows for a reveal (the gap between the door and the jamb) of about 1/8-in. Carefully scribe the top and both sides of the door. 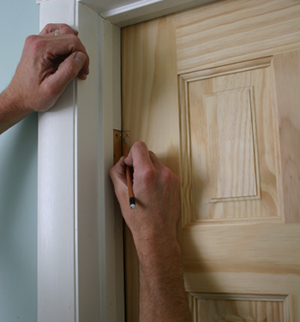 At the same time as the edges of the door are scribed, the hinge layouts are transferred from the jamb to the face of the door.

To mark the bottom of the door, adjust the scribers to allow a suitable gap (typically 1/2 inch) between the door bottom and the finish floor surface. Finally, before you remove the door from the jamb, transfer the location of the existing hinge mortises onto the face of the door.

The top and bottom edges of the door are trimmed with a circular saw, but use a sharp, fine-tooth blade along with a straightedge to guarantee a smooth, straight cut. For trimming the sides of the door, I recommend using a planer with a beveling fence; this is because the latch side must be beveled to prevent the leading edge of the door from rubbing on the jamb, but if you also bevel the hinge side in the same direction, the hinges will be less likely to bind. 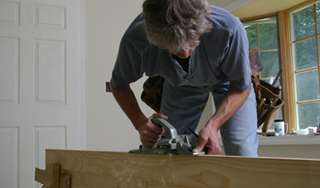 A beveling planer, such as this model from Porter-Cable, is the ideal tool for trimming the sides of the door to size.

Set the planer to a modest (approximately 3 degree) bevel. To prevent a costly mistake, make a test run through a piece of scrap wood to verify that the bevel is facing the right direction-the scribed face of the door will be on the short side of the bevel. When you’re satisfied that your setup and orientation are correct, make a series of shallow passes with the planer; stop as soon as the pencil line disappears. 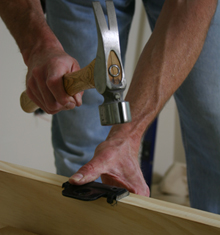 A Butt Marker has three sharp edges that, when struck with a hammer, will stamp the outline of a standard butt hinge onto a door, or a doorjamb (Individual Butt Marker’s are available in 3-in., 3 1/2 in., or 4-in. sizes).

Note: A beveling planer is an expensive purchase, but you can usually find one at a rental outfit. As an alternative, you can sneak up on the cut using a circular saw outfitted with a rip fence: "Leave the line," as we say in the trades, then follow up with a belt sander to fine tune the edge.

After all four edges are trimmed, you should check the fit of the door against the inside of the jamb. Keep the scribers handy in case any of the edges require additional planing. If everything looks good, then it’s time to mortise the hinges.

You can sketch out the outlines for the hinges using a combination square and a utility knife, but an inexpensive tool called a Butt Marker is well worth it’s modest cost. Simply align the Butt Marker with the layout line you drew earlier and give the device a few good whacks with a hammer; then all that remains is to carve out the waste with a sharp chisel.